Billions of people around the world are dying without ever having heard the gospel or even the name of Jesus. Let’s join together in prayer for these unreached people. Pray for God to prepare hearts to hear and receive the gospel and for believers to obey His call to go to them.

Most of the following unreached people groups are considered a frontier people group, meaning there are anywhere from zero to a negligible number of known Christians in their numbers.

How can we pray for them?

What is An Unreached People Group?

A people group is defined as an ethno-linguistic group with a common self-identity that is shared by the various members. For strategic purposes it is the largest group within which the Gospel can spread without encountering barriers of understanding or acceptance.

Unreached people groups are unengaged (UUPG) when there is no church planting strategy, consistent with evangelical faith and practice, under way. Gathering believers and planting churches are the keys to establishing an effective and multiplying presence among these people groups. There are approximately 220 million people worldwide who are unreached and unengaged.

Please join us as we pray for unreached people groups each month. Pray that God will raise up laborers to take the gospel to these parts of the world. Pray for the truth of Christ to overcome the darkness. 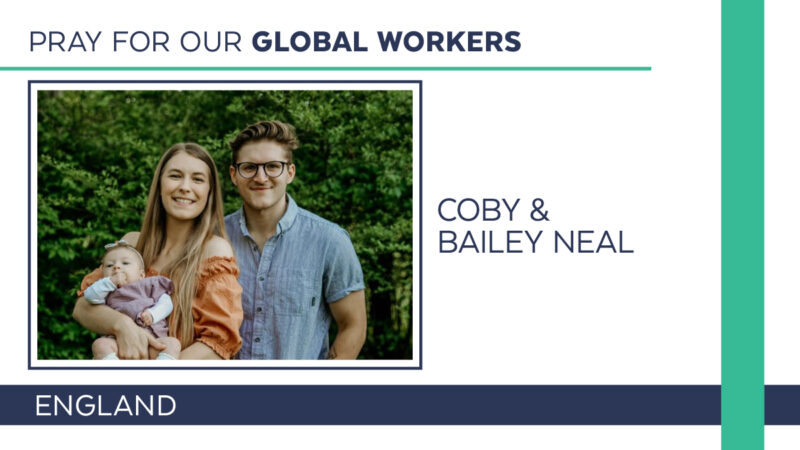 Coby, Bailey, and Naomi Neal have been a part of our Lockeland Springs family for several years and are being sent out to engage the unreached refugee population in Birmingham, England. They will also minister to university students, young professionals, and families who live around them. Pray for this time of transition for their family, safe travels, and provision for funding and housing. Pray for strong relationships with ministry partners and for God to prepare the hearts of people they will encounter.